The institutional Disciplinary Committee (IDC) is constituted for the maintenance of discipline in the institute. The committee will ensure that students obey rules and remain orderly and peaceful in the pursuant of educational objectives/goals in the college community.

Vision
To spell out a comprehensive policy for the constituent-Institutions/ campuses with a view to help them create a civilized and
conducive environments for knowledge seekers at the NCS Education System.
A. Composition and functions
I. The IDC shall consist of 05 faculty members (one from each department) to be nominated by the director campus
ii. The Chairman of the Committee shall be nominated by the director from amongst the members of the Committee.
iii. The quorum for a meeting of the IDC shall be three members.
The functions of the Committee shall be:
I. To deal with all inter-Institute cases of indiscipline in the Institute.
ii. To propose regulations relating to the conduct of Institute students, maintenance of discipline and action for breach of
discipline.
iii. To suspend, rusticate or expel students, on the basis of the inquiry conducted under the Rules and Regulations.
iv. To perform such other functions as may be prescribed.

B. Students Code of Conduct
Every student shall be expected to observe the following code of conduct:
i. Faithfulness in his religious duties and respect for the convictions of others in matters of religion, conscience, customs and
conventions.
ii. Loyalty to Pakistan and refraining from doing anything, which might lower its honor and prestige in any way.
iii. Truthfulness and honesty in dealing with people.
iv. Respect for elders, teachers, administrative and support staff.
v. Politeness to all, especially women, children, old people and assistance to those with special needs.
vi. Cleanliness of dress, mind, speech and habits.
vii. Devotion to studies and sports.
viii. Observance of thrift and protection of public property.

C. Prohibited Acts
The following acts are prohibited for students:
I. Smoking in the classroom, laboratory, examination hall, workshop, library, auditorium or convocation hall and at all other
places where academic activities are conducted.
ii. The possession and consumption of alcoholic drinks or other intoxicating drugs within the Campus and hostels are prohibited.
Even during instructions, sports, study tours, internship camps or entering such places or attending any such tour or camp is
also strictly forbidden. The possession of any kind of weapons/deadly weapons within the campus and hostels are prohibited.
The said person will liable for departmental action.
iii. Collecting money, receiving funds or pecuniary assistance for or on behalf of the institute
iv. Staging, inciting or participating in, or abetting any walkout, strike, or other form of agitation including procession,
demonstration and hooliganism against the institute or its teachers or officers.

v. Inciting anyone to violence, disruption of the peaceful atmosphere of the institute by making agitation speeches or gestures
which may cause resentment and harassment and/or offending other individuals.
vi. Printing, production and distribution of pamphlets, posters, cartoons of blasphemous nature.
vii. Doing anything likely to promote rift and hatred among various groups/ classes of students.
viii. Issuing statements in the press, making false accusations, and lowering the prestige of the University.
ix. Unauthorized and misuse of Institute’s movable and immovable property.
x. Harassment in any form either physical or mental on the basis of gender, religion, sect, caste and creed, region and ethnicity. 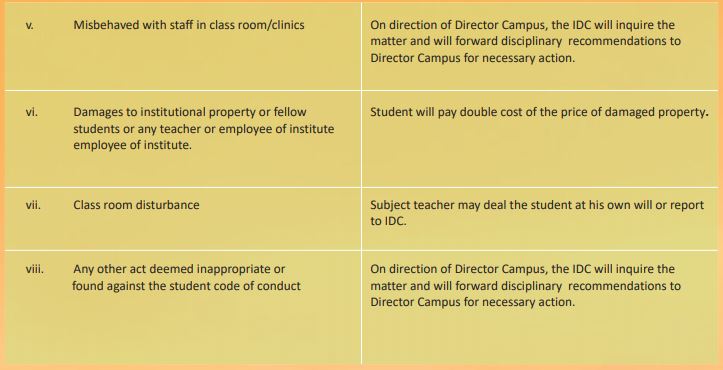 E. TYPES OF DISCIPLINARY ACTION
It consist of followings and single or multiple actions may be imposed on students by IDC
i. Warning letter
ii. Fine Penalty
iii. Struck off and readmission as per institute policy

F. APPEAL
i. Any appeal against the penalty may be submitted by the student to the director within 10 days of announcement of
punishment.

G. STUDENT’S IDS CARD
i. This should be issued to all students by the admin office of concerned departments through admission office.
ii. It is mandatory to display the ID card prominently while inside the premises of institute or attending any event outside the
premises of institute.
iii. The students are required to surrender the ID card immediately upon the completion of their programs of study.
iv. In case ID card is lost, student shall report immediately to the office of the coordinator in written along with an application to
issue duplicate ID card upon payment of RS. 200/-.